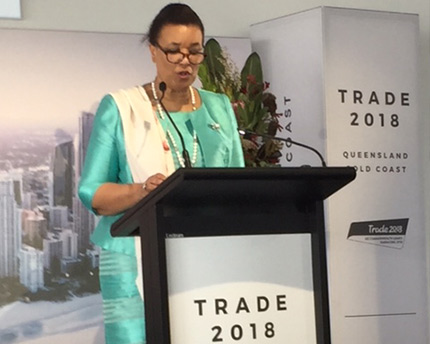 To boost trade and investment in the Commonwealth, an Intra-Commonwealth SME Association and the Trade Portal was launched during Trade 2018, a mega event coinciding with Commonwealth Games 2018 in Gold Coast, Australia.

“If without any focused strategy the Commonwealth countries trade goods worth over US$ 600 Bn, one could imagine how much growth potential exists if support is provided to SMEs and businesses”, she said.

A study by the Commonwealth Secretariat has estimated that intra-Commonwealth trade could surpass US$ One Trillion by 2020.

“Some because of a more developed eco system are able to do better, yet all would benefit by an opportunity to expand the scope of their influence across their national borders. This is what ICSA represents. Our core values as with the Commonwealth is inclusiveness, innovations and shared wealth”, he emphasized.

Mr. Shafquat Haider from Federation of the Bangladesh Chambers of Commerce and Industry and ICSA board member, showcased the trade portal prototype to the participants for their feedback and comments.

ICSA is being incorporated in India and is being currently nurtured by the Advisory Board Members drawn from SME associations and support institutions from several Commonwealth member countries.